Billing systems are often viewed as accounts receivable, as the billing system assists in the collection (receipt) of money from customers. Billing systems are also part of accounts payable (for inter-carrier settlements), as customers often use services from other companies such as wireless roaming, long distance, and call completion through other networks. 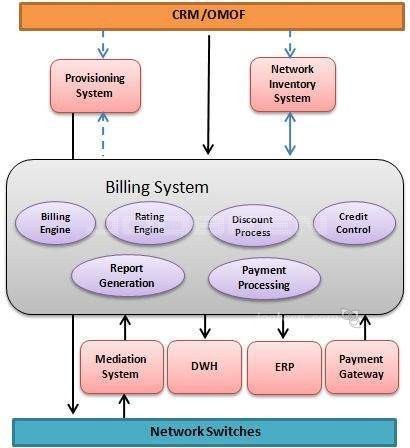 After a call is made or you can say a usage is generated by the end customer, the mediation system gathers usage data from the network switch and builds a call-detail record (CDR). This CDR must contain ‘A’ party number and ‘B’ party number, the start and the end date & times.

The CDR is then stored until it can be rated. To rate the call, the CDR is examined to see if the call is, for example, an 800 number, a local call that is covered by a local-area calling plan, international call or a toll call. Information such as the time of the call was placed and city code or country codes are used to calculate the rate for the call.

This information is then converted in a format, which can be printed in a readable form. Finally, the envelope is printed, stuffed with enclosures, and mailed to the end customer.

There could be different network elements controlling the services and producing different types of CDRs; for example, for GSM telephony −

The following diagram shows the Network elements capturing Usage data and sending Raw UDRs to the Mediation System and finally to the Billing System for rating and billing.

As mentioned above, a CDR keeps usage details along with various other useful information. Below are the most important attributes of a CDR −

Additionally, a CDR may also record other information such as −

The accurate recording of all required information in a UDR depends on the logic of the switch vendor plus the switch specific table entries. If either of these cannot record the data accurately, the mediation system will not be able to recognize the completed calls and pass them to the billing system.